Fossil fuels are burned in electric power plants, factories and automobiles to create energy for our own daily use. This burning process releases harmful gases into Earth’s atmosphere. The gases released bond with the water and oxygen held in the clouds then fall to Earth in the form of acidic rainfall. Acid rain can also take the form of smog, fog, or snow.

The negative effects of acid rain can easily be seen on buildings, especially on old monuments that weren’t built to sustain such levels of toxic treatment. Marble which is the sculptural stone favoured by the ancient Greeks is unfortunately highly susceptible to surface degradation from even low levels of acid rain.

In the centre of Athens at the foot of the Acropolis, heavy vehicle emissions from a surging population have left Hadrian’s Arch blackened by soot deposits. Acid rain has seeped into the marble surface causing cracking, flaking and in some places pieces have even disintegrated and begun to fall away. Worse still, as the acidic chemicals soak further into the marble, they begin to chemically transform the walls into soft gypsum, making structural collapse a possibility. 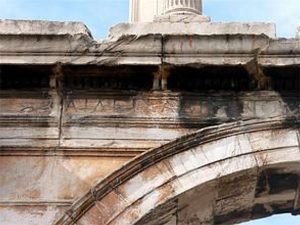 The Mediterranean region has been identified by archaeological experts, as one of the most vulnerable to climate change, with expected drier and hotter conditions, extreme cyclones with accompanying strong winds and intense rainfall, as well as global sea level rises. Cultural monuments, which have survived for millennia, are not immune to these changing conditions.

How does climate change occur?

Earth’s climate is changing. The average temperatures on Earth are rising quickly. Scientists agree that people’s activities are the main cause. When we burn fossil fuel like coal, oil and gas, we not only add to the problem of urban air pollution, we also dump dirty carbon dioxide and other gases into the atmosphere making the greenhouse effect even stronger.

Carbon dioxide and other gases keep the earth warm, by trapping the heat from the sun in the same way that a greenhouse does. Without these gases we would all freeze. But too much of this heat-trapping gas is making the earth warmer than it should be.

A rise in Earth’s average temperatures is very dangerous for the future of life. As Earth’s climate heats up it raises the probability for extreme weather conditions. That means extreme temperature swings, stronger storms, prolonged wildfires, heavier flooding and more severe droughts. These changing weather patterns also pose a greater threat to ancient heritage sites in Greece and throughout the world.

The Temple of Apollo stands in a bare and rocky landscape where temperatures can be very low during winter causing the water that lies within the pores of the marble to freeze. Any temperature rise above 0 degrees Celsius causes the marble to contract in ways that puts mechanical stress on the temple columns and threatens the whole structure. 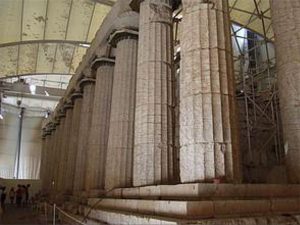 The inside of this church is decorated with Byzantine wall paintings and a wood carved altar. The structure has begun to slide very slowly along the ground. This is partly due to earthquakes but the foundation of the monument is also getting more vulnerable because of increasingly heavy rains, causing a build-up in sediment at the base of the monument. 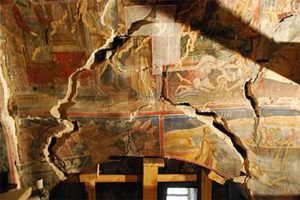 Why are cultural monuments important?

But why should we care? Do we really need these old statues and stones? The answer has to be yes. Archaeological sites like the Temple of Demeter are part of our story. They are the gateway to the mythology and architecture that binds all of civilisation together. The Parthenon in Athens is thought by many to be the world’s most quintessentially important monument. It is widely seen to be the foundation or cradle for Western civilisation as we know it.

What can we do?

If we want to prevent acid rain and combat climate change, the best approach is to use less energy in our day to day activities. When power stations produce electricity they burn fossil fuels like coal. This releases dirty carbon into the air, which causes pollution as well as adding to the problem of global climate change.

…and carbon bust today! You are helping our national monuments survive!

If we can get children to love the environment, to protect it, and find new ways to stem the effects of climate change then this the greatest demographic we can reach, because the children going through this project today are the adults of tomorrow.

We are now experiencing the beginnings of the sixth mass extinction in Earth’s history and this time around, we humans are responsible. Our carbon hungry lifestyle makes it worse every day.

The program provides an emotional context in which the children can learn, safely and happily. Because we know that in order to take in new information, we need to be emotionally open to it and to be touched by it.

We aspire for children to develop a consciousness, an ecological awareness, for every act.

Heritage is a non-renewable resource. It’s a great resource for education and culture, sustainable development, and for local pride. Climate change affects cultural heritage. It will speed up the destruction of monuments, as well as many other things we hold dear to our hearts.

Evaluations exceeded expectations with excellent written and verbal reviews and high numerical scores from both teachers and students.